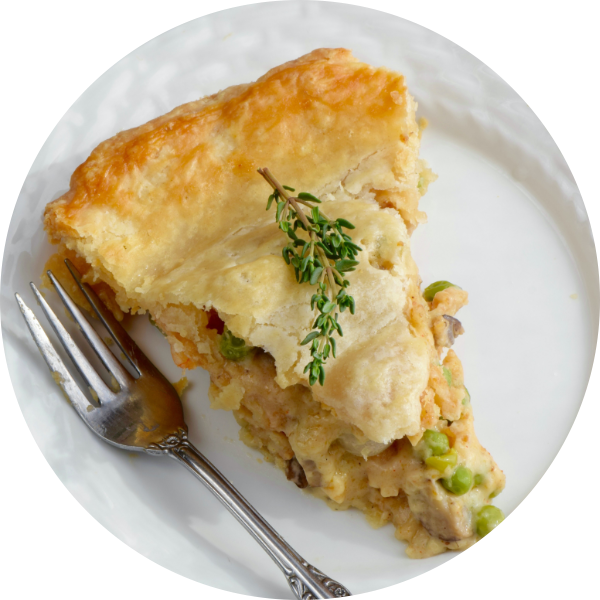 No one can resist a perfect pot pie with its savory, creamy filling inside a flaky, buttery crust. You might assume that achieving a perfect pot pie is beyond your cooking skills (or what you’re interested in tackling on a busy night), but SeaPak Popcorn Shrimp and prepared pie crusts make this shortcut Shrimp Pot Pie recipe a breeze.

While your Popcorn Shrimp bake, melt butter and then whisk in flour to make a basic roux. Once the roux is browned, whisk in cream and white wine. Add veggies and Parmesan cheese, and then the cooked Popcorn Shrimp.

The crust is even simpler – use a high-quality, ready-made crust. The result will be a rich, hearty Shrimp Pot Pie that takes around 20 minutes of prep time.

1 cup half and half

Cook the Popcorn Shrimp according to package directions. We recommend the baking method. Remove from the oven and set aside.

Roll out your first pie crust and put it in a deep dish 9-inch pie pan.

Trim the dough to the edge of the pie pan and set aside.

In a large saucepan, melt the butter. Once melted, add the salt, Old Bay seasoning, garlic, and mushrooms. Cook until the mushrooms are tender. Stir in the flour and cook for 1 minute.

Very slowly, whisk in the white wine, about a tablespoon at a time, until fully combined.

Working just as slowly, add the half and half. Once it is fully combined, stir in the Parmesan, baby onions, and peas.

Finally, stir in the cooked Popcorn Shrimp. The mixture will be very thick.

Pour the mixture into the prepared pie crust and level off so it is as even as possible.

Top with the remaining pie crust.

Trim the crust so about a half an inch hangs off the edge.

Bake the Shrimp Pot Pie for 40 to 45 minutes or until the crust is golden brown.

Let stand for 10 minutes before cutting and serving.